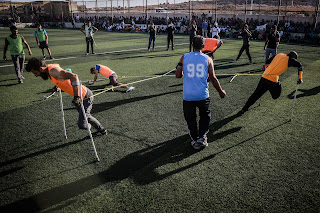 The findings were so interesting. Positive coaching behaviors were those that improved athletic performance or well-being, and included supporting the athletes on a personal level, improving performance by transmitting important and innovative knowledge.  The negative behaviors were those that hurt their performance or well-being.  Those included addressing their gender or their disability inappropriately (Alexander, 2020).  The inappropriate gender references is where I come in.
The athletes also had coaching preferences.  For example, some liked their coaches to be creative, others liked when the coach transferred able-body knowledge to the parasport context.  Some mentioned the need for female coaches, but recognizing it would be unfeasible due to their scarcity.  The authors make brilliant theoretical contributions, practical implications and suggestions for future research based on their study's limitations (Alexander, 2020).  I highly recommend you to read the article on your own if you are interested in getting more detailed information.
Now to the nitty-gritty.  Some research participants were routinely slapped on the butt.  This in addition to their gender being addressed inappropriately (Alexander, 2020).  The authors cite research stating people with disabilities are more likely to be mistreated, and women are more likely to be harassed (Kirby et al., 2008; Wachsmuth et al., 2017, as cited in Alexander, 2020).  Research also shows gender and sexual minorities are harassed disproportionately in sports (Kokkonen, 2019).  So sexual minorities (think GLBTQIA+) with disabilities are in double jeopardy.
As our future leaders in the sport industry, you should not just be up to date with the most recent literature in marketing and management.   You should also read the sociology, psychology, and other sport sciences literature to be well rounded.  It is your job as a citizen of the world to be socially responsible and know statistics like the ones mentioned here.  After knowing they are more vulnerable to mistreatment, I hope you would now be more likely to treat your superiors, peers, subordinates, clients, etc with respect if they have any of the characteristics mentioned here.  I also encourage you to be a proactive bystander and report or intervene when you witness incivilities towards them.

claudia
Welcome to ClaudiaBAmbs.com If you are a current student, I hope you find this material complimentary to my courses and/or advising, if you are a former student/professional I hope this distilled material is of use to you as well. Cheers!